A few weeks ago when I was in a meeting with faculty, I used the term "tablet" to refer to the Wacom Bamboo Pen and I realized from the resulting questions that both the terms "tablet" and "pen" were a bit confusing.  Then I realized I used the terms "slate" and "tablet" interchangeably when they may mean different things to different people.

Although the Wacom Bamboo Pen is the name of the device, it actually comes with both a pen and a tablet.  In the meeting I mentioned, we had just been talking about the Livescribe pen, which is simply a pen (notebook paper sold separately), so in that case "pen" makes more sense.  I don't know why Wacom called it the Bamboo Pen and not the Bamboo Tablet or Tablet and Pen.

Tablet Definition 1: External writing device.  The device shown to the right is what "tablet" means in the case of the Wacom Bamboo pen and tablet. It is used with a computer via USB - without a computer, it is useless.  The pen can be used to write with drawing tools (such as those in Word for Windows) and can also be used as a mouse.  The Wacom Bamboo Pen is only $69 but Wacom also makes high end graphics tablets that are basically computer monitors you can write on directly. 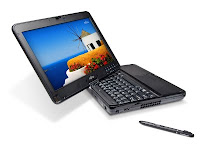 Tablet Definition 2: A computer with a screen you can write on with a stylus.  When people say "tablet," they may also be talking about a tablet PC, like the Fujitsu to the left.  You can write on the screen.  These are pretty expensive - this Fujitsu is $999.


Tablet Definition 3: Touch screen device in between a smart phone and a computer.  Examples would be the iPad, HP Slate, Motorola Xoom, Dell Streak, Samsung Tab, etc.  They can be as inexpensive as $199 for the Samsung Tab; the Xoom is in the $500 range. 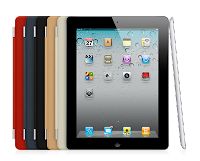 You may have noticed that the HP is called a Slate, but it is a tablet. I did some Googling and found that the two terms are often used interchangeably and pretty much mean the same thing: something you can write on.  Tablet seems to be used more often than slate.  The confusing part though is that tablets can vary so much.  The take away lesson here is to use examples and visuals as much as possible to ensure clarity.

Does this make sense?  Please leave a comment if you have any questions or suggestions on how to explain this.

Posted by April Pierson at 2:20 PM